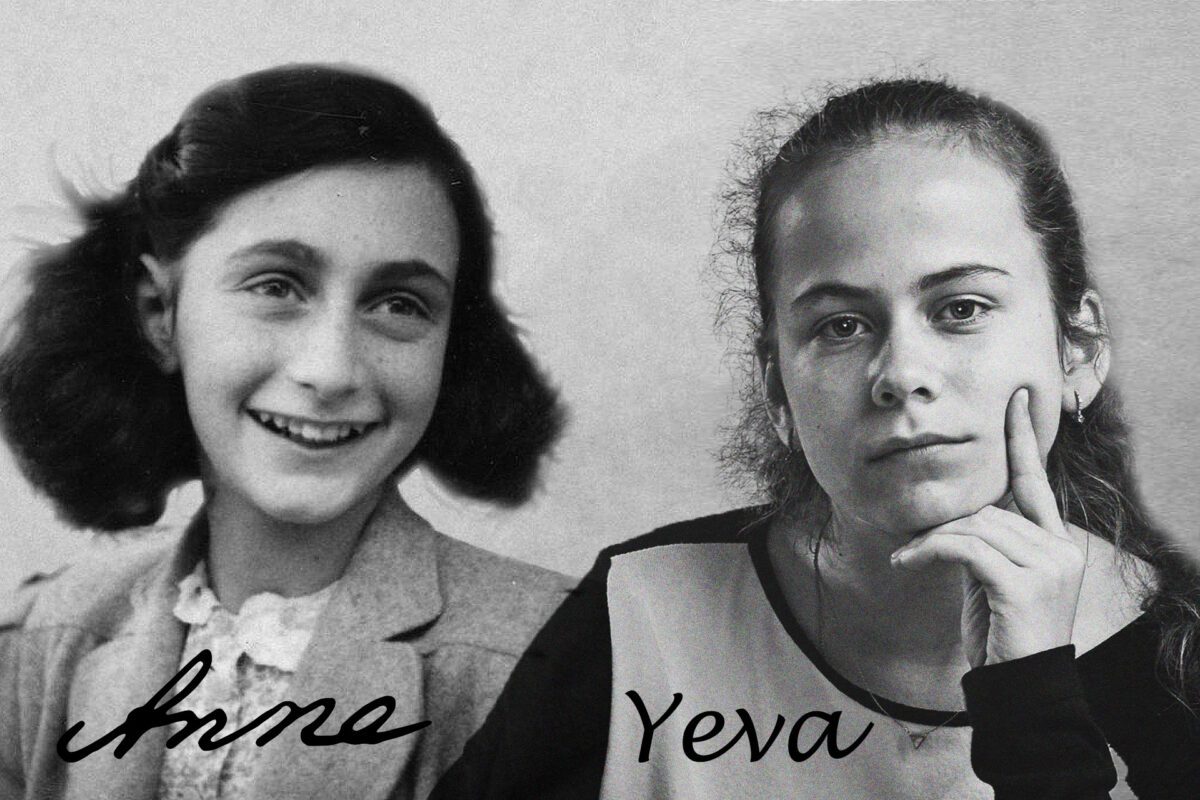 Subject: Contrasting the lives of two girls who wrote diaries about their experiences during war.

Focus: Looking at the diaries of Anne Frank and Yeva Skalietska, one from 80 years ago and one from last year (2022).

Synopsis: Two girls who lived through two frightening wars, 80 years apart.  Both wrote diaries describing their experiences. Both entries start with a birthday. One ends tragically, the other with sanctuary.

The story of Anne Frank has always moved me to tears and the horror of her situation was really brought to life when I visited Amsterdam a few years ago, writes Nina Simon from Redbridge SLS. I’ve always thought it remarkable that the diary survived. It is especially poignant discovering that Anne wrote, “I want to go on living even after my death”  as her legacy survives even though she didn’t.

They are both remarkable, articulate girls who experienced the worst of human violence but who managed to write lasting testimonies of their struggles.

Anne Frank was born in the German city of Frankfurt in 1929 but when she was four-years-old moved with her family to Amsterdam.

Yeva Skalietska grew up with her Granny in the Ukranian city of Kharkiv, near the Russian border, while her mother worked in Turkey and her father in Russia.

They are two girls who lived through two frightening wars, 80 years apart. But both wrote diaries describing their experiences, and both entries start with a birthday. Anne Frank’s diary begins with the excitement of her 13th birthday on 12 June 1942. Yeva Skalietska’s diary starts with the joy of her 12th birthday on 14 February 2022. Thoughts are focussed mainly on presents, parties and the enjoyment of spending time with their friends until their lives change dramatically.

Anne and her family have to hide in rooms at the top of a narrow house, and must keep very quiet, especially while the office downstairs is open. In contrast Yeva and her grandmother hide in basements while Kharkiv is bombed by the Russians; eventually her Granny’s flat is destroyed.

Anne was given her diary as a birthday present and describes it as maybe her nicest present. She hopes that it will be a source of comfort and support as she lives through a terrible time after the Nazis invaded the Netherlands, rounded up all the Jews and sent them to Concentration camps. Sadly, and terrifyingly, on 4 August 1944, their hiding place was discovered. Anne and her family were sent by cattle train to Auschwitz concentration camp and from there Anne was moved to Bergen-Belsen where she died of typhus in February 1945.

Yeva picks up an empty notebook and begins to write everything she experiences from the start of the Ukranian war. Her diary takes us through hiding from the Kharkiv bombings in basements to a train journey across Ukraine to Uzhhorod, then Hungary and finally safety in Dublin, Ireland.  She is one of the lucky ones. More than 500 civilians were found buried in mass graves in early September 2022.

Both diaries reflect the girl’s deep fears, the claustrophobia of confinement and the terrible uncertainty for the future. Anne and her family had to stay hidden at the top of a house, having to keep very quiet because of the open office downstairs. While Yeva and her grandmother hide in basements as Kharkiv is bombed by the Russians and her Granny’s flat destroyed.

Anne writes in her diary, “Not being able to go outside upsets me more than I can say, and I’m terrified our hiding place will be discovered and that we’ll be shot.”

Yeva writes in her diary, “Once we were ready, we headed for the basement.  When we got inside, I started having the panicky feeling again – I couldn’t breathe, my hands turned cold and sweaty. The war had begun. Our basement wasn’t built to be a bomb shelter.  There were hot and cold pipes all over the place. Tons of dust. A very low ceiling. Tiny windows that looked up to street level.”

Discover history from people living it

A compelling novel that looks at the contrasting stories of different children fleeing conflict at different times in history is Refugee by Alan Gratz. Though the three characters are fictional, their stories are based on true life experiences.

Josef is a Jewish boy living in 1930s Nazi Germany. With the threat of concentration camps looming, he and his family board a ship bound for the other side of the world…

Isabel is a Cuban girl in 1994. With riots and unrest plaguing her country, she and her family set out on a raft, hoping to find safety in America…

Mahmoud is a Syrian boy in 2015. With his homeland torn apart by violence and destruction, he and his family begin a long trek toward Europe…

All three children go on harrowing journeys in search of refuge. All will face unimaginable dangers – from drownings to bombings to betrayals. But there is always the hope of tomorrow. And although Josef, Isabel, and Mahmoud are separated by continents and decades, shocking connections will tie their stories together in the end.