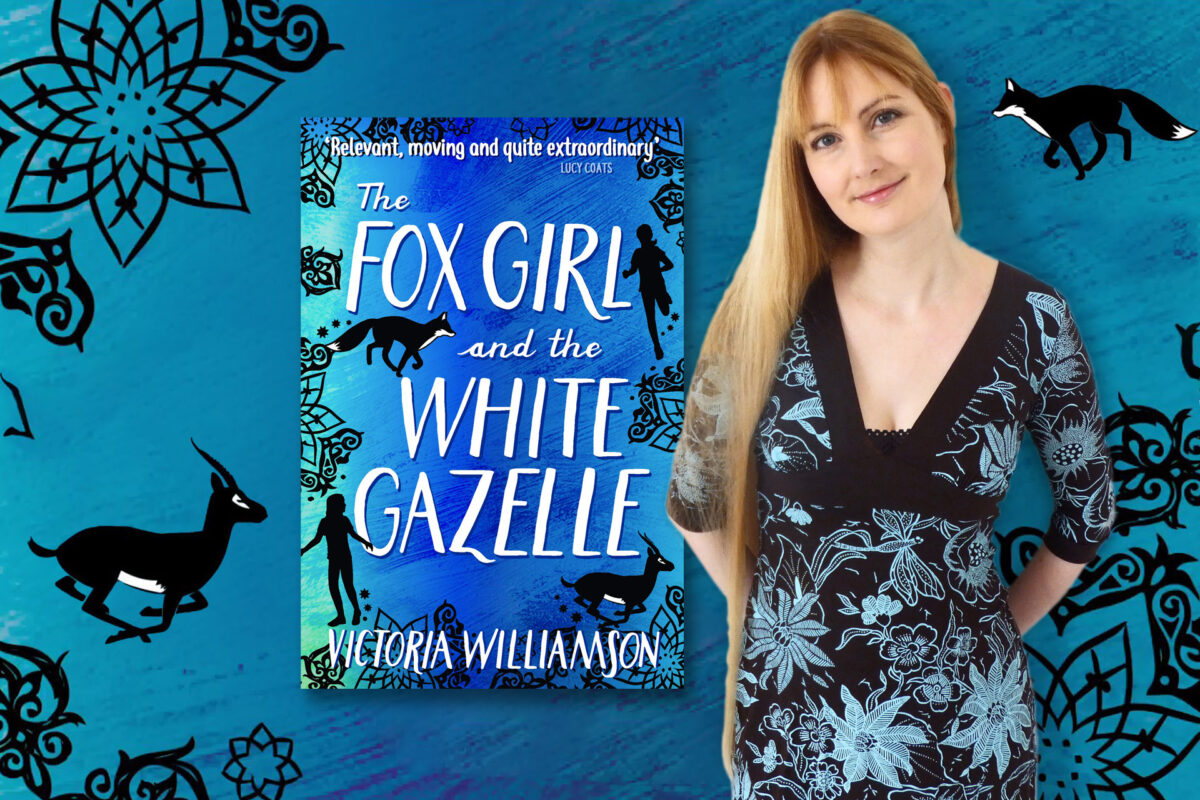 Long stints working teaching with Voluntary Service Overseas, and a travel habit, have inspired Scottish teacher and author Victoria Williamson’s strangely magical adventures which show readers how it feels to be someone else, ranging from a refugee to someone with ADHD. Interview by Nicola Baird.

Q: What are you reading now?

“I don’t get as much time as I’d like. There’s always a little voice in my head saying you should be getting ideas down on to paper. So now I tend to read more non-fiction and I’m doing history courses. I have just finished another Cranachan author, Lindsay Littleson’s book, The Rewilders.”

“Reading was a crucial part of me wanting to be an author,” says Victoria Williamson from her home in Glasgow. “In my family reading was important and I was a voracious reader. My mother used to read to me and my brothers. It was like going to the cinema: we never had a fight over bedtime as we got this dramatic experience for the next hour.”

The author of The Fox Girl and the White Gazelle, her first published book which help KS2/KS3 readers tap into topical issues is a keen supporter of libraries thanks to her early life. “We couldn’t afford to keep up with our reading habit by buying new books every week, but we were at the library every single weekend” She especially loved one library, “originally an old manor house from 1800s that was donated to the people of Kirkintilloch, Glasgow in memory of William Patrick, the elder brother of the owner, and made into the library. The children’s section was tucked up a winding staircase, with adults’ books downstairs. Looking back, it wasn’t fit for purpose, but as a child it was magical going up the stairs to the library, you imagined spooky stories,” she says. Kirkintilloch got an updated library in the 1990s, in a brand-new building. Everything was on one level and open planned, and though much better I missed the old one.”

“I remember being 10 or 11 feeling I’d read everything in children’s section and went down with my dad’s library card to access the adults’ section,” she says. “Although my father didn’t read to us, when he was tired he’d pick up a book, not turn on the TV. He’d talk about books. Reading was a serious business and it continued into adulthood.”

Glasgow may be Victoria’s home for now, but she’s “spent a lot of time moving to other places” and that’s what’s helped shape her empathetic stories.

“I always wanted to be a writer. I probably should have done English literature and history, but for some reason I went down the science route,” says this writer in a rare quiet period between school visits and publicity for her titles including the historical adventure Hag Storm. Her next book, War of the Wind, due out in September 2022, is a thriller. In it a group of children, two who are deaf, one who has cerebral palsy and one who has Down’s Syndrome, solve a mystery. She says: “It’s important to see children as children. These children might be facing certain challenges, but the story isn’t primarily about those issues and their addition support needs. It’s about children getting together as a group of friends and solving a mystery – children seeing representations of other children, who may not be in their class, but who they will have seen in school. We are all the same underneath with the same likes. It’s important to not just see yourself, but to be able to put yourself in other people’s shoes.”

This feeling has been nurtured by Victoria’s experience teaching overseas and in Scotland. As a 21-year-old physics graduate – and a self-confessed nerd – she taught physics and maths at a secondary school in Cameroon for two years through Voluntary Service Overseas.

Back in Glasgow she retrained as a primary teacher. “I was working in a school where a lot of families were seeking asylum. It was my first experience of refuge children and the issues that came up from lots of different countries – African, Pakistan, Iran and Afghanistan. None of the stories were the same. I found that difficult, but also very interesting as well. I was hearing from children and their families, and also coming up against issues that I’d heard about, but hadn’t experienced in first person,” says Victoria.

This later inspired her ‘first’ UK-published book, The Fox Girl and the White Gazelle which went on to be nominated for many prizes, including winning the 2020-2021 Bolton Children’s Fiction Awards. As a nice give-back, 20 per cent of author royalties are donated to the Scottish Refugee Council.

“I felt it was important to have a way to explain to children [about refugees and bullying] so they could understand through characters in a book,” she says. “Obviously, you have to be sensitive when picking something that is not your culture – the character from Scotland and the character from Syria seem completely different at first, but actually they have so much in common.” Even though it’s full of hope, The Fox Girl and the White Gazelle is at times a painful read. But as Victoria points out it’s “ultimately a children’s book, so has to have an uplifting conclusion. There’s bullying in the book. One of the girls is a bully herself and you can look at the reasons – she’s a young carer and her mother is an alcoholic. She’s self-conscious and got a lisp. There’s bullying from her, but she’s also getting bullied. Then you see Reema, a Syrian refugee, getting bullied for just being different. There are also themes of loss. Both girls have lost someone: Caylin, the Scottish girl has lost her grandfather which precipitated her mothers’ alcoholism. And Reema thinks she’s lost her older brother on the way to the refugee camp.”

“Sharing their lives made me realised the importance of diversity in books and children being able to see representations of themselves. British books go to other countries as well, so it’s really important for all sorts of children to see all sorts of children,” says Victoria, who will soon be 43.

“In Cameroon lot of books were donated, and though child specific, a lot were coming from the USA with very different cultural contexts featuring snow, proms and baseball. The children had no idea about what they were reading. I remember my neighbour’s eight-year-old girl, with a very low reading level who I was helping. I picked something I thought was easy – The Ugly Duckling. But we had to stop because she didn’t know what a duck, duckling or swan was. She knew what a chicken was, but I was so immersed in my own cultural context that I’d forgotten that her basis was village life and what children were doing in her own village. I realised I had to bear that in mind – look at a range of full life experience and put myself in their shoes…. “

The experience inspired Victoria to start writing stories with the right cultural context for the children she was teaching.

“I spent years writing lots of different stories, but I wasn’t connecting with the publishing world until much later,” she explains. And that’s because after Malawi she went to live in China to study Mandarin Chinese. “When I got back to the UK I realised it’s not teaching that’s my passion, it’s writing. That’s when I got an agent for The Fox Girl and the White Gazelle.  By then I was on book number 10 or even 12.” It’s fascinating to learn about the ways Victoria’s commitment to education and equality is transforming the fiction experience for KS2/KS3 readers. She knows it took her a while to be able to follow her calling as an author but points out: “I’m glad my first books written in my 20s weren’t published, they were unpolished. I wouldn’t have been proud of them now.” Writing can be a slow game, but when done well it can also be life-changing – for reader and writer.