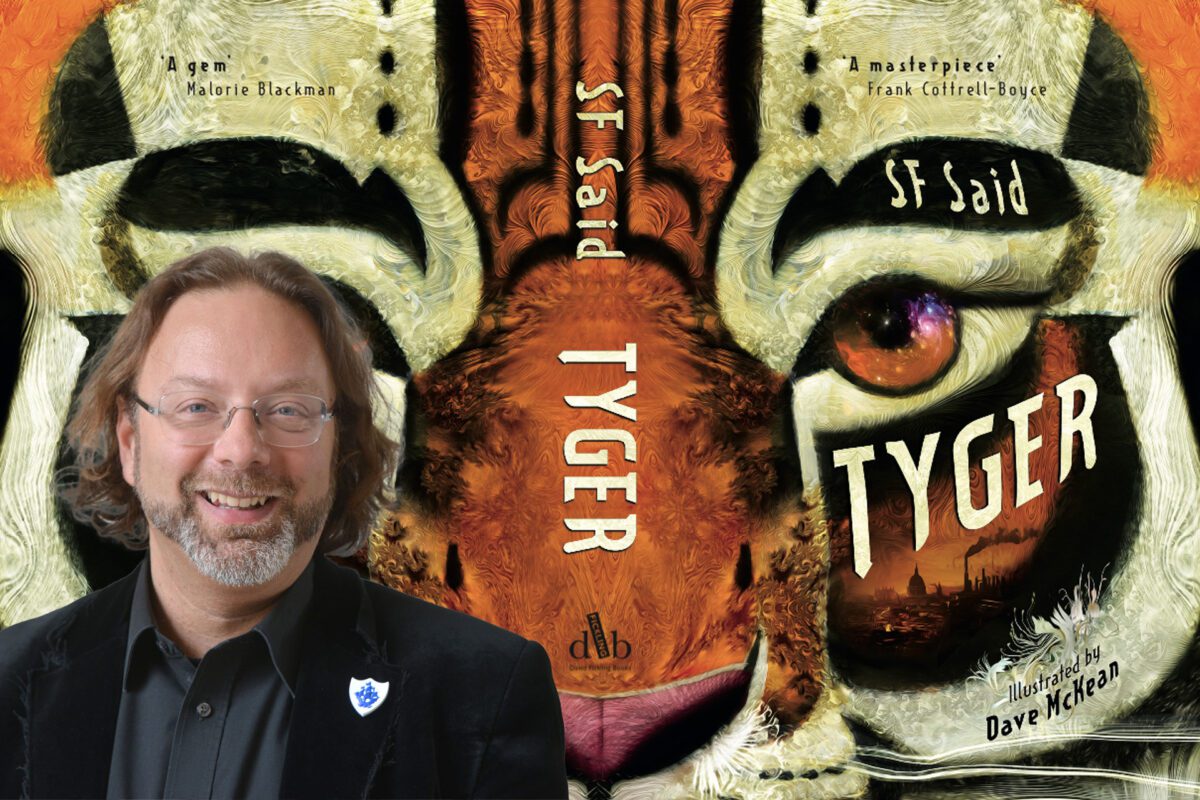 Author SF Said loves libraries and reading so much that he has a pinned Tweet thanking teachers, librarians, booksellers and writers who believe in the power of reading and reading for pleasure. Libraries and librarians also creep into his novels. Here he talks about the ways libraries are important for his writing life and introduces his new book, Tyger. Interview by Nicola Baird

SF Said zooms into view in a room lined with books. He’s wearing a Blue Peter badge – proudly won for the second of his Varjak Paw books (kung fu kitten life aimed at 6+ year olds) when it was judged Blue Peter Book of the Year. His newest book, Tyger, came out in October and is already into a reprint.

“It’s amazing to see a book go out into the world, especially when you’ve spent nine years of your life writing it. I set out to be more exciting than Varjak Paw and more ambitious than Phoenix. It was a long hard process, so it’s an emotional time seeing people read and respond to it.”

What’s extra special about Tyger is SF (as he’s known in person and wittily @WhatSFSaid on Twitter and Insta) is that this new 43,000-word book was written in his nearest libraries.

“Without libraries Tyger would not exist. Every morning I’d go to my local public libraries around Harringey. I love that they have closing and opening hours and that forms a very useful structure for the day. If I work at home, it’s easy to postpone and prevaricate and get nothing done, but if the library shuts at 7pm then I have to get some work done. I owe my working practice to libraries, but I also see amazing work putting books and readers together. They are vital and irreplaceable. Seeing cuts and closures is horrifying: destruction of one of the pillars of society and democracy,” says SF who has been involved in campaigns to ‘save libraries’ including one in 2017 to support Haringey staff.

“You occasionally hear commentators saying ‘no one uses libraries’, but that is not true. If you spend a day in a public library, you’ll see millions of people of all sorts using them. I’m constantly talking about this on Twitter – they are a bedrock. Also, in an age of disinformation they are the guardians of the flame of information. Libraries can be relied on in a way that search engines cannot and digital tech orgs cannot. There are so many ways in which libraries and librarians are vital,” he says with passion. And that’s why he’s supporting the Great School Libraries campaign which urges every “school to have a library and a librarian to help inspire their children to read for pleasure, and to gain all the lifelong benefits of literacy.”

In Tyger illustrator Dave McKean (who also made comics with Neil Gaiman) again gives SF’s characters special life. “Tyger is a really beautiful object. We were looking at the great tradition of Victorian and Edwardian children’s gift books. It’s a joy to hold in your hand as well as to look at,” says SF happily.

“All action takes place over a week in London. It’s the present day, but we are in a strange alternate world. It would be set over Christmas, although in that world it is midwinter,” adds SF who’s lived in London since he was two years old.

“I’m a Londoner and have lived all over. It’s very much a core part of my identity. I’ve read a lot of books and seen a lot of movies with a London that I just don’t recognise. I wanted to get more of my kind of London, both positive and the negative experience, because it can be a place of violence and horror and greed. But I also love how open it is, anyone can be a Londoner,” he says. “I also love how diverse London is, I can hear every single language of the world spoken here. Tyger is a London book, but it’s set in an alternate world so a little bit different.”

The story has been slowly coming to SF. He credits childhood readings of Watership Down, Blake’s poem learnt at school and a passion for using old-fashioned cameras while writing Phoenix. “I’m always drawn to night photo and long exposures. I was lucky to do the photos for London’s Lost Rivers by Tom Bolton, an academic, who does walking tours, particularly of lost rivers. All these tribs that flow to the Thames have now been concereted over but were working rivers only 100 years ago – the Tyburn, Fleet, Westbourne are very much part of London’s history,” says SF. He then tells a story about how you, “Can stand in Sloane Square tube station and look up and see the River Westbourne flowing in a pipe over your head as it runs diagonally over the station. As I was doing photos forthis beautiful book I was thinking these are amazing locations so the idea for Tyger and an alternate London was developing: so what if what if those rivers were not lost and were as they were a couple of 100 years ago? I put a lot of that into Tyger.”

Hopefully this is not a plot spoiler, but one wonderful scene Dave McKean has captured is the underground library. “Dave McKean is my favourite artist in the world,” said SF holding up the book before flicking to an intriguing image of water, brickwork and books that just wants you to guess at the story. “Tyger is a dark alternative world and I really wanted there to be some warm and welcoming spaces where my characters would get a bit of help. This image is of one of the tunnels that leads you to an underground library where librarians hold the secrets of the world.”

Just this anecdote alone makes you wonder if there could be a better reason for adding Tyger to library collections? Enjoy SF Said’s blog at http://www.sfsaid.com/