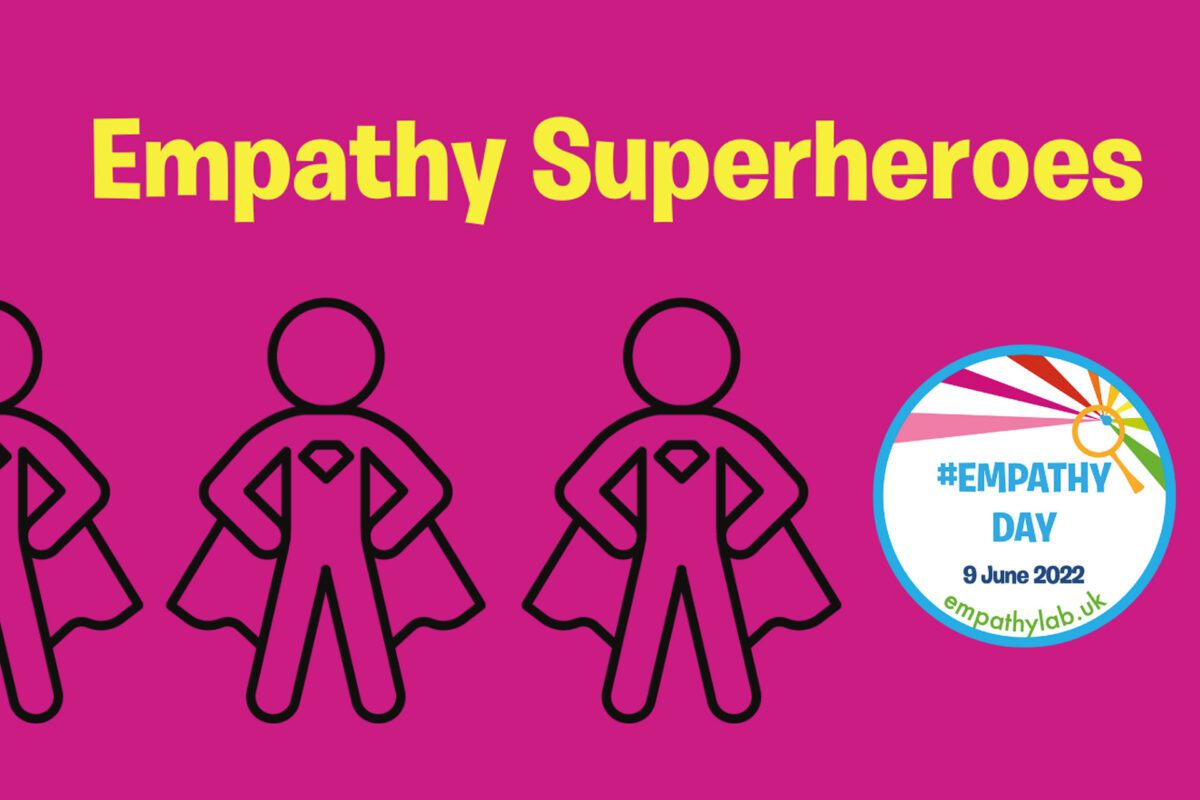 Titles from the Read Empathy collection, 2022:

Where did the idea of book-based empathy building come from? And what are the highlights of Empathy Day on June 9? Miranda Mckearney from the EmpathyLab explains. Interview by Nicola Baird.

The EmpathyLab’s work to help students of all ages develop empathy is based on two areas of scientific research explains Miranda Mckearney. “Firstly, empathy is learnable, which a lot of people find really surprising. Only 10 per cent of our empathetic ability is genetic.”

“There’s a second bit of research in neuroscience and psychology looking at what happens in our brains when we read. It’s complicated, but when we read a story multiple areas of our brain light up and that makes the process of reading feel very real. For example, if we read the word ‘cinnamon’, would light up the olfactory bit of your brain. So, when we read about characters and their feelings it feels incredibly real as you are experiencing living inside someone else’s skin. From a child’s point of view that’s a very safe way to expand their understanding of people’s lives and perspectives,” she says.

This research was fascinating, but for Miranda it opened another door that has led her to drive forward a book-based empathy movement which will see over a million children develop better empathy skills by 2026.  https://www.empathylab.uk/empathy-builders

In 2014 Miranda left her busy role at the Reading Agency, a charity she’d founded, and which had brought the popular Summer Reading Challenge to public libraries across the UK. But after trekking in the Himalayas and New Zealand she went back to Winchester with a new plan. “I thought I was retiring, and I did join the Jane Austen House Museum as a trustee, but I was fascinated by this building body of research on empathy and the written word. At that time there were a lot of concerns about the effect of social media on society’s empathy levels and the kind of world young people were growing up in.”

Working with four fellow founders, the group decided that the implication of this research could make an important difference to society.  “We thought if we could springboard off books, which are ubiquitous in education, and simultaneously develop empathy, that’s dynamite. We held a big think in at the Royal Festival Hall and invited a cross-section of people – including scientists, child development people and people from my world of books and authors to explore the question of whether as a society we were making enough of this link? In a nutshell the answer was no. They said go away and do something about it.

After lot of experimentation and grassroots work in 11 pioneer schools, the EmpathyLab’s programme took off.

Highlights now included a regular January launch of the Read for Empathy collection for 4-16-year-olds (primary and secondary collection) chosen by an expert panel -2022 titles include Danny Chung Does Not Do Maths and The Proudest Blue. There are free resources for librarians and teachers, plus a schools’ programme which introduces senior leadership teams to empathy pedagogy via whole school strategies with a focus on Wales because the new Welsh curriculum features the word ‘empathy’ 35 times. Empathy Day was introduced as an experiment in 2017. This year it’s June 9 with a buzzy online festival starting at 7.30am.

Despite her day job with many books to read, Miranda goes to her local book club – their current title is Kazuo Ishiguro’s latest Klara and the Sun, but it’s reading the EmpathyLab choices that she loves. “We want to harness the electricity that authors and illustrators can bring. They have such an effect on children. This Empathy Day there is an empathy superpower challenge – for participants to decide on their human superpower,” says Miranda which will include practical activities during May in schools and libraries such as empathy walks and making empathy glasses culminating in author festival events with Abigail Balfe, Tom Palmer, Nadia Shireen, Benjamin Dean and many more.

“One teacher fed back in evaluation last year that she’d never done anything with Empathy Day before and was absolutely astonished by how quickly the children learnt the concept, and the word and why it was important and how excited they were to put it into action,” says Miranda with pride.

“One of our key tenets is there is no point learning about empathy and reading a lot of empathy rich texts, unless you are actually going to change something, although that change can be quite small. We ask everyone to make an empathy resolution. Last year an eight-year-old said, ‘My empathy resolution is not to judge people before I’ve got to know them better…’ I thought if only we could all manage to do that: children are very wise,” she adds.

“My challenge is always not to give advice. My resolution will be around that: to try and listen without giving advice. I know giving advice doesn’t help, my grown up children tell me it doesn’t help. What helps is really, really listening. And that in itself is healing, as is asking really great questions as you listen which allows them to open up their own feelings and find their own solutions,” says a clearly self-aware Miranda.

This need for deep listening is a growing trend, and one that the EmpathyLab is supporting by running teacher training it’s part of a much wider CPD training. “We do a listening audit and always ask everyone to be really honest. We always have really deep discussions, as it is partly a teachers’ role to help and give advice. Some of the work they’ve been doing around listening skills has been transformational.”

Reports on the EmpathyLab website show how they’ve worked with schools developing very particular empathy skills for children. “We have four target skills – empathetic communication is one and we do a lot of work with listening,” explains Miranda. “Feedback includes improvements in relationships. If you use a book and focus on character and feelings rather than the plot and technical aspects, what teachers have found is that this can be transformational as children can talk within the safety of the book about feelings. Children who wouldn’t normally be sharing their feelings or be able to join in the discussion can talk about characters and their feelings – and that really helps overall school and class climate,” she adds.

With such a range of titles designed to aid empathy skills, backed by research, you are sure to find that the EmpathyLab is worth setting aside a good chunk of time to look around. Happy reading.