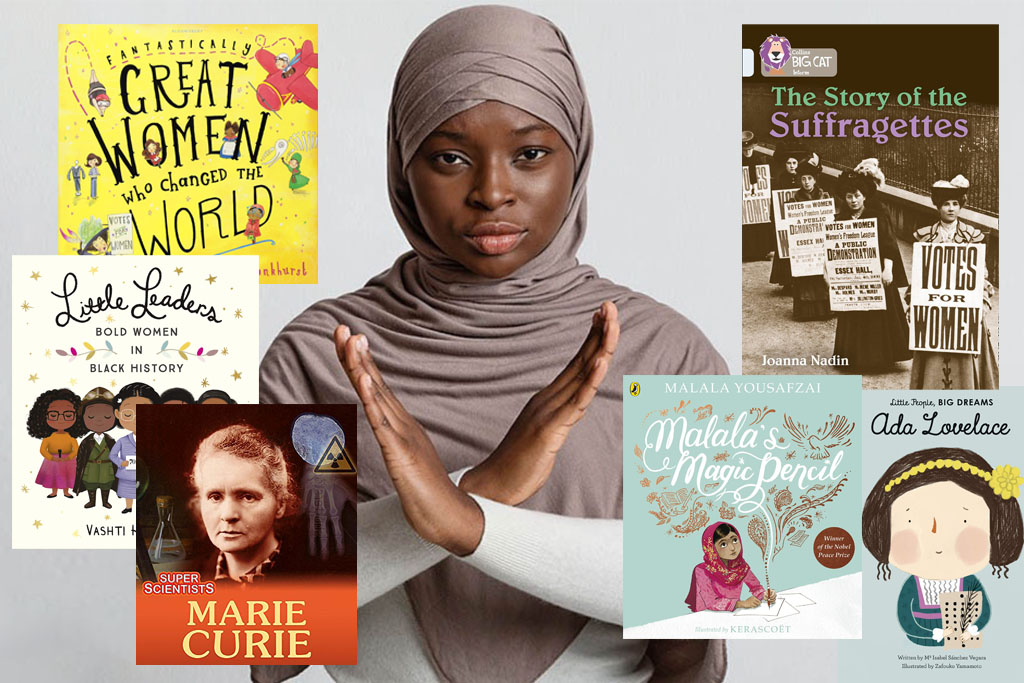 Synopsis: Why is it necessary and worth disseminating the history of women? Here we look at the importance of International Women’s Day, its origins and how the day is celebrated in modern times. We’ve also highlighted some of the social, cultural, and political achievements of women to help spark a discussion with your pupils on what can be done to create a gender equal world – free of bias, stereotypes, and discrimination. Access to our project resources includes the suffragettes’ Votes For Women sash and banner.

International Women’s Day on 8 March was always an important day when I was growing up writes Wanda Gajewski from SLS Wandsworth. We lived in Poland and my dad would always bring flowers and chocolates for my mum, my two sisters and me. In fact, the origins of a Women’s Day date back to Ancient Rome.  Women’s Day was then a tribute to the goddess Juno, who was the protector of women’s lives. Women prayed for happiness in married life, and husbands on this day gave their wife a gift. There are reports that the worship of women is associated with the Roman celebration of Matronalia, the feast of motherhood, fertility, and the feminine element in nature. At that time, women were treated in a unique way, gifts were given and women’s wishes were fulfilled. Celebrating International Women’s Day (8 March 2022) at school is a great way to help children learn more about this celebration – especially its modern invocation.

Children will learn where Women’s Day came from

By design, International Women’s Day is a celebration of the memory of women fighting for women’s empowerment, equal treatment at work and equal pay for equal work.

The history of the March 8 is a symbolic date. At the beginning of the previous century, at a time when a woman was still not equal to a man, she could not vote, study, or simply decide for herself in the world. It happened in New York in one of the factories, where dozens of ladies worked hard for symbolic pennies. The day came when a few of them got a little more angry than usual and went on strike.

The owner of this factory was so surprised by their action that he did not know what to do. To think about it calmly, he met and discussed it with other owners of nearby factories, and the enraged women were locked in the factory hall.

Unfortunately, just after his departure, a fire broke out in which more than a hundred women died. The outrage was so great that people from all over the city took to the streets. It was 1909 and the first step towards equality had just been taken.

The situation was picked up by the socialists of that time, who, on the wave of social unrest, tried to climb towards political power. They spread the word around the world that the strikes are their idea and that they will not allow women to continue to live in such conditions.

However, the very first Women’s Day was not announced in America but in Denmark. On March 8, 1910, the Socialist International in Copenhagen established International Women’s Day, to be celebrated throughout the world. Their aim at this inaugural event was to emphasise the idea of women’s rights.

Q What rights did women fight for?

Many women at the beginning of the twentieth century wanted the right to vote and equal access to public life with men. Rights in the field of access to culture, education and professional work were particularly important. Women from lower social strata demanded universal education with more determination than they had in the nineteenth century.

The Charter of the United Nations was signed in 1945, it was the first international document confirming the principle of equality between women and men.

The year 1975 was declared the International Year of Women by the United Nations. Two years later, the General Assembly recognised the important role of women in social development and peace process. It also called for greater support to be given to women so that  they can participate fully and on an equal footing in socio-political life. On 17 December 1999, the Assembly designated 25 November as the date for the celebration of the International Day for the Elimination of Violence against Women . The World Health Organization, in 2006 proclaimed February 6 as the International Day of Zero Tolerance for Female Genital Mutilation.

Unfortunately, International Women’s Day was the reason for the violence in Tehran. On March 4 in 2007, Iranian police beat up and arrested many women. Some of them reported a few days later that they were locked in solitary confinement and interrogated.

Overall March 8 should be remembered as a day commemorating the fight for equal treatment based on gender and should be celebrated in this way. But in every country the celebration looks a little different.

Will you help break the bias and say no to bullying, and no to discrimination? Cross your arms to show solidarity.

Collectively every person and all groups can make difference within their sphere of influence by taking concrete action to help build a more gender equal world. From small powerful gatherings to large-scale conferences and events, International Women’s Day is a big day for inspiration and change.

Are you in? Will you actively call out gender bias, discrimination and stereotyping each time you see it?

Imagine a gender equal world. A world free of bias, stereotypes, and discrimination. A world that is diverse, equitable and inclusive. A world where difference is valued and celebrated. Together we can forge women’s equality.

IDEA: Kickstart a discussion by asking why Women’s Day is necessary? Why do you think it is worth thinking more about the history of women?

Women’s history is an essential part of social history as women made a very large contribution to the development of civilization. In addition, the history of their activities is very interesting, and its dissemination is important to emphasise the importance of women in various arenas, from social to political. In recent times, the history of women as a subdiscipline is becoming more and more ‘’popular’’ among researchers. New areas are explored not only from the nineteenth and twentieth centuries, but also from much earlier periods, going back to the Middle Ages and even ancient history.

IDEA: Facilitate a discussion by asking your class – Which women do you think the school should pay particular attention to?

Throughout the years, history has revealed women who have been pioneers for women’s rights and racial equality and have defined the world of science, education, medicine and politics. If we were to refer to March 8, which symbolises women’s aspirations for equality, we should probably point to the British women – the suffragettes – who were pioneers in clearly demanding voting rights.

The list of the most famous women in history should be endless. Children will have an opportunity to collate their own list of astounding women who achieved amazing things by following their hearts, talents, and dreams. They could fly through the sky with Amelia Earhart, speak out for what is right with Emmeline Pankhurst, and cause a fashion revolution with Coco Chanel.

See more ideas in the book suggestions below. To borrow books in schools contact your Schools Library Service provider or for help finding your nearest provider, fill in this simple form.

Fantastically Great Women who have changed the World by Kate Pankhurst

Inside the mind of Susan Greenfield: Brain Scientist by Pam Bishop

The Story of the Suffragettes by Joanna Nadin