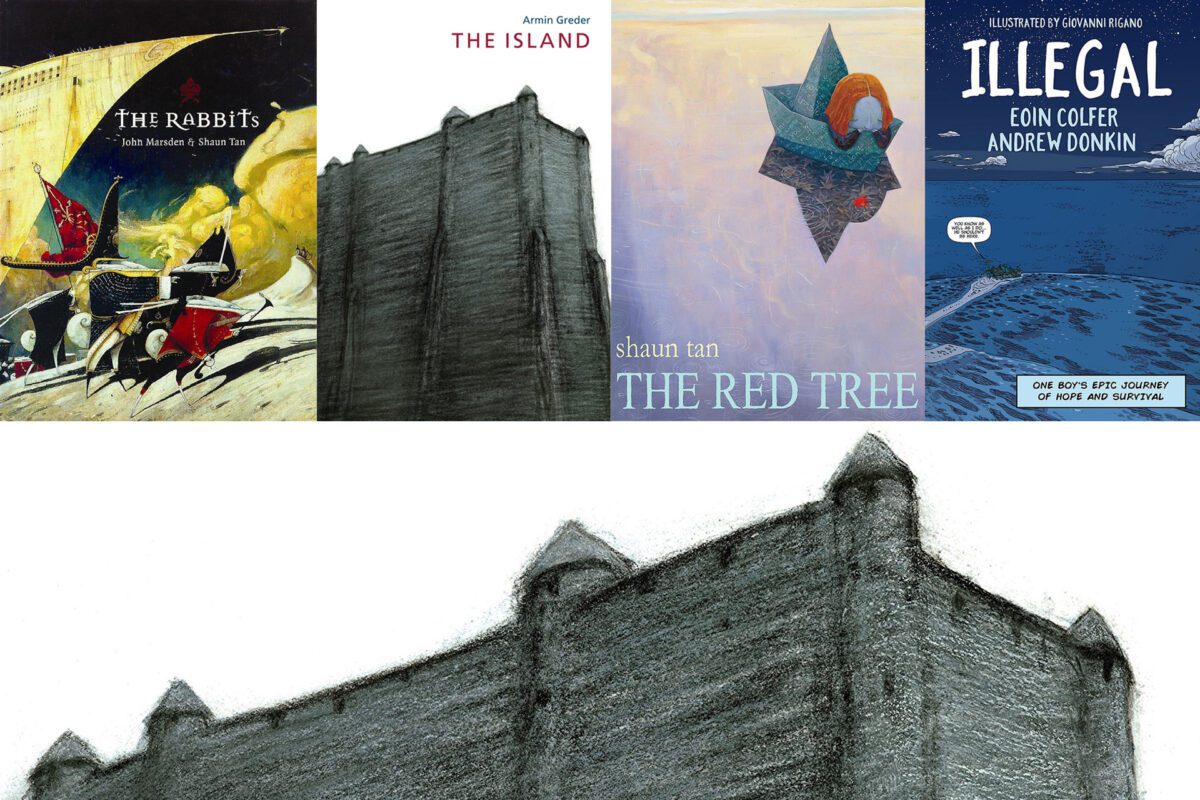 Synopsis: A round up of the ways graphic novels can help students understand and discuss hard-hitting, and often frightening, current events, from people smuggling to depression.

Last year I read Tweets from two children’s picture book writers, both calling for publishers to accept manuscripts that dealt ‘honestly’ with the subject of climate change. One of them spoke out against a publisher that had told them to tone down the message in one of their books, about animals being affected by man-made climate change, to make it acceptable for all markets.

Not long after, I watched Don’t Look Up, a film that has certainly divided opinion (but wasn’t that the theme of the film, anyway?) and was struck by the parallels of business opportunists wanting to soften the truth to make it more palatable and commercial.

Raymond Briggs’ When the Wind Blows is often cited in these discussions as an example of a picture book that leaves nothing out when it comes to putting the unpleasant details of a terrifying subject on to the page. This debate is often accompanied by remarks that “This book wouldn’t be published today” – it came out in 1982 at the height of the Cold War.

But I don’t think publishers are shying away from controversial topics.

Picture books for older readers and graphic novels consistently demonstrate the effectiveness of the medium in exploring difficult and complex issues and encouraging discussion. These books may stray from a popular perception of what constitutes a children’s book, but they certainly exist. Notable examples include the books listed below. The Island
by Armin Greder

Looks at immigration, refugees and prejudice

With art inspired by the expressionist and symbolist painting movements, The Island is a grim tale – a fable and dark satire published in 2007 exploring the xenophobia faced by immigrants, refugees and strangers. It’s a stark look at institutionalised prejudices and doesn’t have a happy ending.

The Rabbits
by John Marsden and Shaun Tan

Looks at colonialism and the British Empire

Marsden makes full use of Tan’s surreal, symbolic illustrations in this 1998 tale that reveals itself to be a history of Britain’s colonisation of Australia, with the plague of invaders cleverly depicted as the titular rabbits. This is a powerful indictment of colonial rule and empire-building. Tan’s art style turns what are usually cuddly balls of fluff into imposing figures, overrunning the landscape already overshadowed by their monolithic ships. This is partly a story of industrial and military might versus the natural world, and the minimal text is complemented by some heart-breaking art and composition choices.

A masterfully illustrated graphic novel from 2018 for Years 5 and up. Illegal follows a child – Ebo – on his perilous journey from Ghana to Europe, following his siblings. Based on research and on stories told by refugees – one of which is adapted and illustrated as an afterword – this is a story common to the thousands of men, women and children risking their lives each year journeying between Africa and Europe. It explores the humanitarian crisis exacerbated by the ruthless people-traffickers who prey on the migrants.

The Red Tree
by Shaun Tan

This is another overlooked gem of a picture book, from 2001, though admittedly a potentially difficult read and sometimes difficult to know exactly who to recommend it to. The book is about being lost, depressed, and seemingly alone in – as Tan puts it – a world without form or reason. Almost every page will be frighteningly familiar to its readers, being beautifully rendered metaphors or reconstructed environments that we live our daily lives in (like in The Rabbits, Tan throws our world back at us from the perspective of someone for whom it’s a badly fitting garment). It’s a far cry from conventional picture books that deal with feelings. The lack of text is deceptive; this really is for older readers who are struggling with their place in the world.